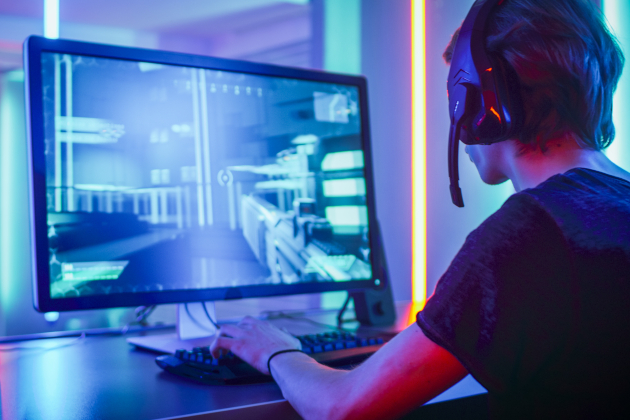 Esports is best defined as competitive video games. Games that can be considered esports require skill and are usually played in teams, though some are also single player. When on a team, esports athletes fill certain roles much like traditional sports. Teams are usually formed by students or a staff member who has an interest in gaming or simply wants to see students working together using gaming.

Esports also promotes critical-thinking situations, encourages students to develop strategies, and provides a platform for students to practice outside-the-box thinking. The community side of esports helps students learn good social skills and engage in interactions with others they might not usually encounter.

How to Get Esports Equipment When it comes to esports equipment, the simplest—and most inexpensive—option is to utilize existing computer labs or drafting and 3D modeling computers.

For schools that fundraise, there are many options for esports machines that get students excited and proud to be on the esports team. Bytespeed, for example, has the brand Gravity Gaming, which specializes in esports machines and peripherals. Other major brands like Dell’s Alienware, HP’s Omen, and Acer’s Predator offer high-end gaming machines.

Currently funding is something that most high school esports teams struggle with. Some states are starting to use grants and major sources of funding to assist with getting teams started, but a majority have to put in work at the concession stand and a few bake sales to get money for equipment, jerseys, and entry fees. One current source of funding is the Varsity eSports

Foundation. It is accepting grant applications for fall 2020 through summer 2021. More grants for school technology can also be found on GetEdFunding.com.

Esports Leagues and Organizations There are several leagues that provide competition for esports teams on a local, state, and national level. In the for-profit category, there is High School Esports League and PlayVS, which have a flat fee to enter the league or a cost per student.

The North America Scholastic Esports Federation is a nonprofit esports league that provides competitions for its teams and several educational resources for schools to implement esports curriculum.

On a more local level, several states have nonprofit organizations providing esports competitions where students get together and compete against schools for conference, district, and state championships. These state organizations are a great option because they also offer local tournaments for students to meet their competitors and learn to have healthy competition and social interactions.

Ryan Hinds and his wife started the esports team for Elm Creek Nebraska in 2017 as a way to connect middle and high school students who enjoyed playing video games. In 2018, Ryan helped found the Nebraska Schools Esports Association (NSeSA), which has grown to more than 20 schools. Ryan is the recipient of the High School Coach of the Year Award for the 2019–2020 school year from the National Association of Esports Coaches and Directors. He currently works as a head coach at Concordia University where he is building the esports program to provide scholarship opportunities for varsity players and content creators.